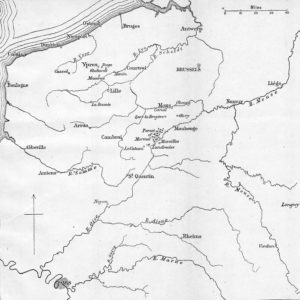 I have thought fit to interrupt my narrative here to devote some pages to the composition of the original Expeditionary Force. The First Expeditionary Force consisted of the First Army Corps (1st and 2nd Divisions) under Lieut.-Gen. Sir Douglas Haig; the Second Army Corps (3rd and 5th Divisions) under Lieut.-Gen. Sir James Grierson (who died shortly after landing in France and was succeeded by Gen. Sir Horace Smith-Dorrien), and the Cavalry Division under Major-Gen. E. H. H. Allenby. To these must be added the 19th Infantry Brigade, which, at the opening of our operations in France, was employed on our Lines of Communication. The original Expeditionary Force was subsequently augmented by the 4th Division, which detrained at Le Cateau on August 25th. The 4th Division and the 19th Infantry Brigade were, on the arrival of Gen. Pulteney in France, on August 30th, formed into the Third Army Corps, to which the 6th Division was subsequently added.

For the purpose of convenient reference, I have included in this chapter the composition of the 6th Division, which joined us on the Aisne, and of the 7th Division and the 3rd Cavalry Division, which came into line with the original Expeditionary Force in Belgium in the opening stages of the First Battle of Ypres; as also of the Lahore Division of the Indian Corps, which likewise took part in the Battle of Ypres.

Chief of the General Staff: Lieut.-Gen. Sir A. J. Murray.

2nd Batt. Connaught Rangers. (2nd Connaughts were amalgamated with their 1st Batt. at the end of November and replaced in the Brigade by 9th H.L.I. (Glasgow Highlanders).)

1st Batt. Gordon Highlanders. (Employed as G.H.Q. troops during September, being replaced by 1st Devons, but rejoined Brigade at beginning of October.)

19th Infantry Brigade: Brig.-Gen. L. G. Drummond, succeeded early in September by Brig.-Gen. F. Gordon. [Note.—This Brigade was formed from units on Lines of Communication, and was attached successively to the Cavalry Division, Second Corps and Fourth Division during the retreat from Mons and advance to the Aisne. In the Flanders fighting of October-November, 1914, it worked with the Sixth Division.]

Lines of Communication and Army Troops:

[Note.—The 28th London (Artists’ Rifles), 14th London (London Scottish), 6th Welsh and 5th Border Regt. were all in France before the end of the First Battle of Ypres, as was also the Honourable Artillery Company. These battalions were all at first on Lines of Communication.]

North Somerset Yeomanry (attached to the Brigade before the end of First Battle of Ypres).