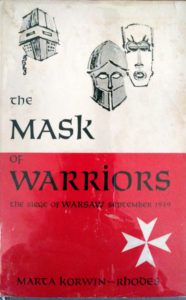 All the morning I work in the office. The hospital is functioning very well, but is already so overcrowded that we shall be unable to admit any more casualties or wounded. We must establish another hospital.

In the afternoon I go to bring bread from the auxiliary hospital at the Rey School. there, unexpectedly, I meet my great friend Grzegorz Fitelberg, the famous conductor. His wife is seriously wounded…she is dying.

“What are you doing here, Fit?”

“I am a stretcher-bearer.”

A stretcher-bearer has the heaviest work of all; it is day work and night work. It never ends, carrying wounded out of the ambulances or cars, on to the first or fourth floor–the auxiliary hospitals have no arrangements for taking stretchers in the elevator. Then down to the operating theater and back again, picking up people in the streets. Such is the task that Fitelberg, Poland’s greatest conductor, has undertaken. […] 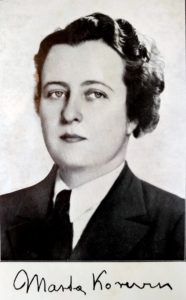 Before the war, Marta Korwin Rhodes graduated from the Krakow Conservatory of Music and became a concert pianist. During World War II, she was director of one of the emergency hospitals established in Warsaw during the September 1939 siege. After the Germans defeated the Polish resistance, she fled to England where she served with free Polish forces until the end of the war. She wrote this book to help raise funds for the Polish fight for freedom. This books is highly recommended for its raw depiction of a city under siege, without water, food or electricity, but still firm in its courage and will to fight on against an evil regime.