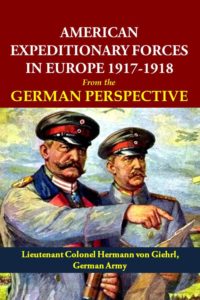 Herman von Giehrl, a highly decorated member of the German General Staff, wrote this detailed, candid, but ultimately woeful tale of a great power’s ambitions thwarted by the arrival of American forces. It was originally published in 1921 in the German military journal, Wissen und Wehr. In this highly informative, emotional, yet objective work, we learn why the Germans embarked on unrestricted submarine warfare (and the unintended consequences), their staff estimates of the strengths and weaknesses of the young American forces, the courses of actions planned before the Americans interceded, and how the Americans’ arrival radically changed those plans for the balance of the war. Von Giehrl fought at the winter battle in Masuria and the battle of Gorlice-Tarnów in 1915; and was subsequently assigned to the General Staffs of the IX Reserve Corps and the XVI Army Corps. He was awarded the Ritterkreuz (Knight’s Cross) of the Military Max Joseph Order in October 1918 for the planning of the Abwehrschlacht (defensive battle) and the tactical retreats at the front, “in which the Aisne was crossed without appreciable losses.” Available in paperback and Kindle ebook at Amazon 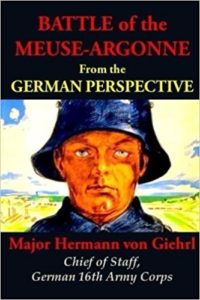 Battle of the Meuse-Argonne from the German Perspective, by Major Hermann von Giehrl, is a German military analysis of the Battle of the Meuse-Argonne. In Major von Giehrl’s eyes, the Americans and French are the enemy. But his writing is surprisingly free of nationalistic fervor; instead an objective view of the 42 days leading up to the German surrender, written by a soldier, not a politician or apologist. Von Giehrl is candid in his assessment of the effectiveness of the French and Germans, worn down after four long years amidst the shocking weapons of modern war–tanks, aeroplanes, machine guns, mortars and gas. By contrast, his description of the naïve but strapping young Americans as they arrived on a ravaged continent not yet having learned to fear the horrors that awaited them is truly poignant. Available in paperback and Kindle ebook at Amazon 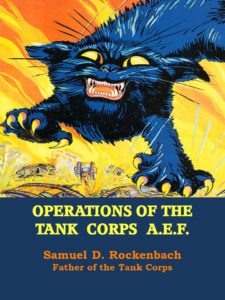 Operations of the Tank Corps A.E.F. is widely cited and quoted by historians but only a few original typed copies are known to exist. It has never been published—until now. Here is the verbatim transcript of that famous document, commonly called, “The Rockenbach Report,” written by the Father of the American Tank Corps, Samuel D. Rockenbach. In it he details how he designed, organized, manned, trained and finally deployed American Tank forces into the Western Front of 1918 Europe. Appended to the original Rockenbach Report—and reprinted here—are supporting documents with even more information on those early Tank Corps days. These include after-action reports on the St. Mihiel, Meuse-Argonne and Le Catelet-Bony offensives by: Lieutenant Colonel George S. Patton, Jr., Commander of 304th Tank Brigade; Colonel Wahl, Commander of French Tanks assigned to American forces; Major Sereno E. Brett (who assumed command of the 304th after Patton was wounded); and Major R. I. Sasse, Commander of the 301st Battalion fighting with the British E.F. Also included is an organization chart of 1st Army Tank Corps as of September 10, 1918 listing its units and names of officers assigned. Available in paperback and Kindle ebook at  Amazon 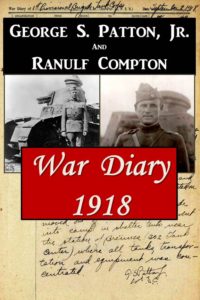 The War Department required commanders to keep a daily war diary to capture in detail the operations of their units on the Western Front of the Great War. George S. Patton Jr. commanded the first American tank brigade in World War I. Ranulf Compton was one of Patton’s battalion commanders. War Diary 1918 is the verbatim transcription of Patton’s and Compton’s War Diaries during the last months of the war, including the Battle of St. Mihiel and the Meuse-Argonne Offensive. Adding to the historical value of these diaries is the fact that after Patton was wounded the first day of the Meuse-Argonne Offensive, Sereno E. Brett, the commander of Patton’s other tank battalion, assumed command of Patton’s brigade and Compton was put in charge of “all the tanks at the front.” Patton, a graduate of West Point, was a career Army officer. Because Patton played a pivotal role in the development of the early Tank, his career was closely linked to the success of tanks on the battlefield, making him especially eager to demonstrate their effectiveness. Compton, a Harvard man who would return to private life after the war, did not share the same predilection for tanks. While Patton in his daily diary entries tended to gloss over some of the challenges of operating tanks in the fog and mud of war, Compton was more candid in his diary comments. While Patton went on to further fame and glory, Compton went back to finish his New York Guard obligations and settle into a comfortable private life, first serving as a U.S. Congressman representing the State of Connecticut and then owning a broadcasting company. But as an eyewitness to early tanks in battle, Compton left behind a valuable piece of unvarnished history regarding early tank warfare. Available online at Amazon