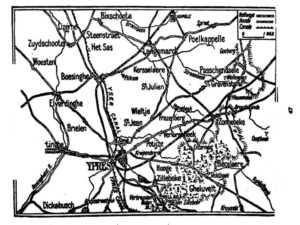 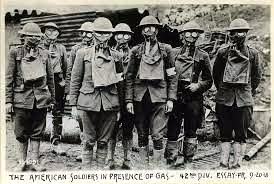 “As the minds of both soldiers and civilians bent themselves to the great contest, it was inevitable that they should be busied with forecasts. All agreed that the war would be of a magnitude never known before in history, and that most of the problems would be different in kind from those of the past. During the last half century revolution had succeeded revolution. The invention of the internal combustion engine had provided motor transport and airplanes. Field telephones and wireless telegraphy had altered the system of communication among troops. The cannon had passed through a series of bewildering metamorphoses, till it had reached the 75mm. field gun and the mighty siege howitzer. No single weapon of war but had a hundredfold increased its range and precision. The old minor tactics, the old transport and intelligence methods were now, it appeared, as completely out of date as the stage coach and the China clipper. There would be no room in the Higher Command for the brilliant guesses, the sudden unexpected strokes, or the personal heroisms of old days. It would no longer be necessary to divine, like Wellington at Assaye, what was happening behind a hill. In one sense, many argued, the problem would be simpler, at least it would have fewer elements; but these elements would be difficult to control, and from their novelty, impossible to estimate. There was a general agreement that modern war was a venture into the unknown, and that while the existence of the new factors was plain, their working was incalculable.

“Let us glance at some of these new factors. The chief was the vast numbers now destined for the battlefield. The greatest action of the old regime was the Battle of the Nations at Leipzig, but there the combatants numbered only 472,000. At Sadowa there were 436,000, at Gravelotte 300,000. (A useful summary of the numbers engaged in the chief battles of the nineteenth century will be found in Otto Berndt’s Die Zahl im Kriege.) In the Russo-Japanese war the armies had been greater–Mukden, for example, had been fought on a front of eighty miles, had lasted for three weeks, and had engaged 700,000 men. But in the coming war it was plain that the number of troops, the length of the front, and the duration of actions must be indefinitely enlarged. The improvement in firearms would itself, as Schlieffen had pointed out in 1909, lead to a great extension of fighting front. The handling of such masses over such an area meant that railways would be of the first importance. Moltke, in 1870, had foreseen this, and his successors in the German command had practiced his teaching. They held, probably with truth, the view that Napoleon’s ultimate failure had been due to the fact that his armies had outgrown the technical resources of his age, and they were determined that every resource of contemporary invention should be harnessed in the service of their new millions. Staff work, too, Moltke had first made a science, must advance pari passu with the growth in complexity of the problems. One special feature also must distinguish this from other struggles. It was the first instance in history of large bodies of men operating in a closely settled country, for in most parts of the garden land of Western Europe there was little freedom of movement. The cultivated nature of the terrain would no doubt simplify the problem of communications, but it would not be easy to find the wide and open battlefield which it was believed that great masses of men would require.

“For it was almost universally assumed that the coming war would be a war of movement and maneuver. The principal reason for this view was that men’s minds could not envisage the long continuance of a struggle in which the whole assets of each nation were so utterly pledged. They underestimated the power of human endurance; they believed that modern numbers and modern weapons would make the struggle most desperate but also short, since flesh and blood must soon be brought to the breaking-point. Such a view was possible, because no belligerent had recognized the immense relative increase of strength given by modern weapons to the defence over the attack. One form of defence, the old-fashioned fortress, was indeed rightly underrated by Germany, for she realized that the heavy howitzer directed by aircraft would make havoc of the type of fort upon which France and Belgium had relied. (In practice, though in theory France held the sound doctrine which had been laid down by Napoleon. See his Corr. xiii. 10726, and xviii. 14707.) But of the impregnability of field entrenchments no combatant was aware till the third month of war. (See Lord French’s remarks in his 1914, pp. 12-13. the man who foresaw modern conditions most clearly was the pacifist Jean de Bloch, writing at the close of last century.)” John Buchan, History of the Great War, Vol. I (Cambridge: The Riverside Press, 1922), pp. 114-116. 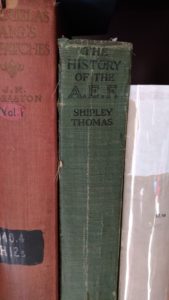 “It was between the front lines, in the maze of old abandoned trenches, and in the marshy No Man’s Land between these, that the American Army in France had its first taste of real patrolling. Each night, every battalion in the line would send out a patrol on some mission or other; and every now and then the Germans would send one out, and occasionally these two would mix in the pitch black night and fight it out. The Americans were very brave, while the Germans were very skillful, so the honors at first went mostly to the enemy until it was learned by sad experience that it does not pay to send a patrol of ten men out every night at precisely the same hour, through the same gap in the wire, on the same sort of mission. The capture of one such patrol of the 16th Infantry Regiment taught the whole American Army a lesson.” Shipley Thomas, The History of the A.E.F. New York: George H. Doran Company, 1920), p. 59.