George Patton describes the execution of his bold plan to rescue American troops surrounded by German forces at Bastogne, the pivotal battle of World War II. The German push through the Ardennes was Hitler’s last chance for victory. He might have succeeded had it not been for Patton’s military brilliance and the dogged determination and bravery of his Third Army. Read the full story here, written in Patton’s own words.

Purchase your copy of Notes on Bastogne Operation at Amazon

Campaign in Poland 1939 is a previously classified analysis by U.S. military strategists at the Department of Military Art and Engineering, United States Military Academy, into the German invasion of Poland in September 1939. Included are maps showing the troop movements and engagements over the course of the four week conflict that ended in a conquered Poland. To purchase your paperback or Kindle ebook, please click here Amazon

German Fifth Column in Poland by the Polish Ministry of Information exposes the treachery of the German population living inside Polish borders but lending clandestine assistance in September 1939 to the invading German Army. To purchase your paperback or Kindle ebook, please click here Amazon

German Occupation of Poland was published by the Polish Ministry of Foreign Affairs in the first years of the war. It exposed for the first time to the world community the dire conditions in Nazi-occupied Poland—the summary executions of civilians, eviction of Poles from their homes, the closing of schools, synagogues, universities and the forced relocation of Jews into ghettoes. To purchase paperback please click here Amazon  For Kindle ebook Amazon 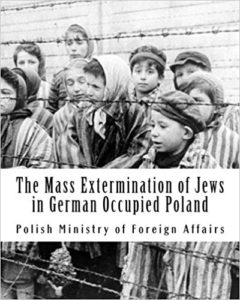 Mass Extermination of Jews in German Occupied Poland was written by the Polish Ministry of Foreign Affairs as an appeal to the world community to save Polish Jews from the Nazis. Unfortunately, it did not help. To purchase paperback or Kindle ebook, please click here Amazon

Trying to Stop a War in 1939 is a compendium of communications exchanged between the political and diplomatic representatives of Great Britain, Poland, Germany and Russia in the year leading up to the German invasion of Poland in September 1939. Originally published by the British Foreign Office as a testament to its extraordinary diplomatic efforts to rein in Hitler’s territorial ambitions, this voluminous collection of speeches, communiqués, cables, letters, messages and notes has been faithfully reproduced verbatim. Only explanatory headings have been added to help the reader easily find the pertinent individuals or subject matters of interest. Click here for paperback or Kindle ebook  Amazon