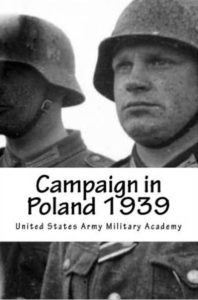 Excerpt from The Campaign in Poland 1939 (Silver Spring: Dale Street Books, 2014), Originally published in 1941 at the United States Military Academy.

Potentially, Poland as a nation could never be a match for the newly armed Nazi might, backed by the tremendous German industry, rich resources, and plentiful reserves. Poland’s near bankruptcy and industrial backwardness would always hamper greatly any modern armament program. She possessed a fairly large iron and steel industry, an oil output of one eighth her peacetime needs, and a newly created, but small, airplane industry. In all other production necessary for a modern war, including the manufacture of automobiles and trucks, she was totally lacking. With agricultural produce her only exportable surplus, her international credit was low.

Thus, lack of home production caused her to maintain equipment long considered obsolete by most major powers, while limited purchasing power compelled her to accept any foreign equipment she could buy. Further, the poor Polish road net, the famous Polish mud, and the local abundance of good horseflesh caused her military leaders to overemphasize the importance of horse cavalry and transport. The result was such that the outbreak of war found Poland in possession of an army patterned closely after those of the First World War.

With Hitler’s ascent to power in 1933, Germany had inaugurated a program designed to train and arm a fighting force second to none. In1935, she had resumed universal training. By the summer of 1939, she had succeeded in training 2,500,000 of her 86,000,000 population, and had available equipment reserves for more than twice that number. Approximately 900,000 of those trained were members of the active Army, 200,000 were in the active Air Force, while 1,400,000 had completed their two years of service and had been released to the reserve. In addition, Germany had within her borders 1,700,000 men who had seen active service in the First World War. The members of this latter group, though relatively unfamiliar with the technique of modern weapons, were capable of rapid and easy conversion to first-line troops.

Germany’s peacetime Army consisted of 35 horse-transport infantry divisions, 3 mountain divisions, 4 motorized divisions, 5 heavy mechanized (panzer) divisions, and 4 light mechanized divisions. These were grouped into 18 corps and 6 armies. On 1 September, Germany had 90 peacetime and reserve divisions ready for active operations. Sixty of these had been concentrated for the Polish campaign. The mobilization of some 50 to 60 additional divisions was either in process or was begun immediately. It appears that none of these were considered fully fit for field operations during the first month of the war.

The basic fighting unit of the German Army was the more numerous horse-transport infantry division. This division was triangular in form-three infantry regiments of three battalions each-and had strength of 15,261 officers and men. The fire power of the division was tremendous. It contained 342 light and 100 heavy air-cooled machine guns, 81 light infantry mortars (50-mm.), 54 heavy infantry mortars (81-mm.), 72 antitank guns (37-mm.), 18 infantry howitzers (75-mm.), and 6 infantry howitzers (150-mm.). Of these weapons, 12 of the antitank guns, 27 of the light and 12 of the heavy mortars, 6 of the 75-mm. howitzers, and 2 of the 150-mm. howitzers were organically assigned to each regiment.

Germany had about 6,000 tanks. Three quarters of these were organized into panzer and light mechanized divisions. The remainder was formed into a number of GHQ tank regiments, to be used for close infantry support. The panzer division, with its strength of about 14,000 men and 3,000 vehicles, was organized into three echelons: a reconnaissance force, a shock force, and a ground­holding element.

The German motorized division was identical with the horse-transport infantry division, except that motor transport was furnished for all men and equipment and a mechanized reconnaissance battalion was added. The infantry themselves were transported in four wheel drive light trucks. The heavy infantry weapons-heavy machine guns, mortars, infantry howitzers, and antitank guns-were transported in or behind one-ton half-track trucks. These vehicles, with their low silhouette, excellent road speed, and cross-country mobility, gave considerable tactical mobility to the unit.

A difference between the German Army of 1939 and that of 1914 was the function and quantity of horse cavalry. At the outbreak of war in 1939 Germany had only one two-regiment brigade of horse cavalry, located in East Prussia. This was later expanded into a cavalry division. There were approximately fifteen independent cavalry regiments, located in Germany proper and trained as reconnaissance units. Each independent regiment was organized so that upon mobilization it could be split up into reconnaissance detachments or troops of 300 men each for the infantry divisions. In addition, each infantry regiment was given a mounted reconnaissance platoon. For corps and armies, the reconnaissance units were motorized.

The same was, of course, true for the reconnaissance units of motorized divisions. A report dated 22 September, 1941, states that the cavalry division was being converted into a motorized division, and that the only mounted units then in the German Army were the platoons assigned to infantry regiments. Apparently the mounted detachments assigned to divisions had been abolished. A later report, dated November 22, 1941, states that the conversion of the cavalry division to a motorized division was postponed and that the division operated as a horse cavalry on the Russian Front as late as October, 1941.

By the summer of 1939, Germany had achieved her dream of an Air Force second to none. Through the means of flying and soaring clubs, as well as more formal civil and military training, she had built up a reserve pilot strength of approximately 100,000. Her potential production was estimated as high as 2,000 airplanes per month. She possessed a fighting force of 7,000 first-line planes, organized into four air fleets. In addition, she had available parachute and air infantry, whose use she postponed till a later campaign.

Poland, with her population of 34,000,000, had an active Army of 266,000 and partially trained reserves of nearly 3,000,000. Owing to prior mobilization, 600,000 were ready and available on M day, while an additional 400,000 were mobilized before the campaign ended. Rowing, owing to the rapid German advance and the immediate destruction of Polish railroads, most of the latter took little part in the combat. Except for an estimated two divisions, they were thrown into battle by regiment or smaller unit when the situation became desperate.

The 600,000 men already mobilized were organized into 30 infantry divisions, 12 independent cavalry brigades, and certain army, corps, and special troops. The Polish infantry division, though nearly equal to the German in man power, was woefully weak in supporting weapons. Its light and medium artillery consisted of a heterogeneous lot of 75-mm. and 105-mm. pieces. Although 45 light antitank guns were authorized for each division, only about half were on hand on 1 September. Only 200 light and 200 heavy anti­aircraft guns were available to the entire Army.

Poland’s Air Force, a part of the Army, contained 900 first-line planes and about 600 in second line. All were of a design greatly inferior to those of her opponent. Her mechanized strength consisted of 600 well-designed light tanks, organized into one tank brigade and several independent regiments.

Man for man, the Polish soldier has always been an able opponent of any foe he has met. On many fields and under many flags, his ancestors have demonstrated their bravery and endurance. In 1939, the average Polish soldier was fairly well trained, could march long distances, and was possessed of a high morale. Company officers had reached a high degree of efficiency and were uniformly well considered. Above the company, however, the Polish command was questionable. Limited schooling, lack of large-scale maneuvers, political influence upon promotion, and an outmoded strategic doctrine, all combined to make the higher officers compare unfavorably with the Germans of like grade.

Very little has yet been published on the detailed Polish command and staff organization. It is known, however, that no group (Poles called their filed armies “groups”) commanders existed in peacetime, and that upon mobilization the Polish chain of command included no link between the group and the division. Smigly-Ritz, the commander in chief, was a virtual dictator, controlling the country’s political as well as military affairs. Since successful operation in wartime necessitated extreme decentralization of command, able staffs and group commanders familiar with their duties should have been available to absorb some of the many duties which otherwise would fall upon GHQ. The results of the war indicate that such was probably not the case.

Since 1933, Hitler and his subordinates had done all in their power to improve the stamina, training, and morale of the manhood of Germany. Youth organizations, mass civilian drills, group calisthenics, and organized athletics raised the physical endurance of the nation as a whole. The work battalions and universal military conscription furthered this physical development and added discipline and military training. Service with the armed forces, even in peacetime, became a serious business. Military housekeeping and administration by the troops themselves was cut to a minimum. The training program provided for ten hours of drill and instruction for six days a week. There were frequent forced marches and extended maneuvers under simulated war conditions. The German trained reserves and the men of the active Army and Air Force were without peers in the military world of 1939.

The officer corps of the German Regular Army has long been recognized as the greatest stabilizing influence in the German nation. To be a member of that class has always been considered a high honor. This corps, while small between 1918 and 1932, maintained its traditions of efficiency and devotion to duty. Only men of good family, long military experience, and demonstrated ability could hope to receive important command or staff assignments. The high command had repeatedly been given the opportunity to handle forces as large as 100,000 in the annual fall maneuvers.

In addition, much valuable command and staff experience had been gained when Austria and Czecho-Slovakia were overrun. That the German commanders in the higher grades proved their worth when real war began is shown by the fact that two years later those who had been the senior commanders in the Polish campaign still held the key positions.

At the beginning of the invasion of Poland there was doubt in the minds of many regarding the efficiency of the junior leaders, most of whom were reserve officers. However, they proved to be quite satisfactory.