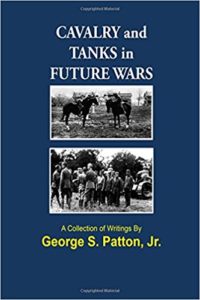 Excerpt by George S. Patton, Jr. on the effects of the Great War on the military, republished in Cavalry and Tanks in Future Wars (Silver Spring: Dale Street books, 2017).

[…] Another feature resulting from the [Great] war, and which also has left its mark, is the evolution of the specialist.

His birth is the result of an unholy union between trench warfare and quick training. Fighting in trenches was more or less stereotyped; hence men apt at bombing, shooting rifle grenades, using automatic rifles, etc., had time and opportunity to ride their hobbies. Further, it was easier and quicker to make a good grenade-thrower than a good soldier. Time pressed, so one-sided men were evolved who knew little and cared less for anything but their one death-dealing stunt. But the evil did not stop here; these one-idea gentry could be more quickly produced by instructors of a like ilk. These instructors and their pupils assembled in schools, with the result that unit commanders did not train their men, did not learn to know them, leadership suffered, and as one drink leads to another, so the evil grew. The only way to fight such collections of specialists was to devise “set-piece” attacks, where each did his little stunt in his little way. This made necessary voluminous orders defining in detail the littlest operation, and in consequence taking all initiative from the fighting officers. All that was left to them was to set heroic examples; and this they did.

Now, so long as the specialists could ply their sundry trades behind the barrage and scavenge in the wake of the shells, they were efficient; but when they either lost the barrage or progressed beyond the range of the guns, they were lost. Untutored courage was useless in the face of educated bullets; so when the barrage was gone, officers and men felt naked and at a loss. They had no confidence in the rifle which they had never used; for confidence is the result of habit. Fire and movement, as taught by the Field Service Regulations, were forgotten or never learned.

Our own men, thanks to the genius of General Pershing, were less troubled by the specialist disease than were our allies; but, due to the lack of time, many of ours were not, and could not have been, well-rounded open-war soldiers. Now, the moral of this story of the specialist is this: the combat officer must be the combat instructor of his own men; not only must he know his own tactics, but he must know how to use the various instruments with which his unit is equipped to ply its trade, and he must know each better than any of his men. Further than this, he must have thought and practiced the use of his complicated instrument, so that it plays equally well under his hand the simple one-step of the set-piece attack or the complicated tango of the open-war fight. He must think, teach, and practice the tactics of his arm. […]